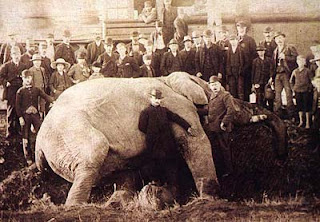 Jumbo died at a railway classification yard in Canada at St. Thomas, Ontario, where he was hit and fatally wounded by a locomotive. Barnum afterwards told the story that Jumbo died saving a young circus elephant, Tom Thumb, from being hit by the locomotive... the Wikipedia.org describes ‘Jumbo (1861 – September 15, 1885), also known as Jumbo the Elephant and Jumbo the Circus Elephant, was a 19th-century male African Bush Elephant born in the French Sudan (present-day Mali). Jumbo was eventually exported to a zoo in Paris, France; and then transferred in 1865 to London Zoo in England. In November 1881, Jumbo was sold for $10,000 USD to P. T. Barnum, who took him to America for exhibition in March 1882. The giant elephant's name has spawned the common word, "jumbo", meaning large in size. Jumbo's height, estimated to be 3.25 metres (10.7 ft) in the London Zoo, was claimed to be approximately 4 metres (13.1 ft) by the time of his death’. 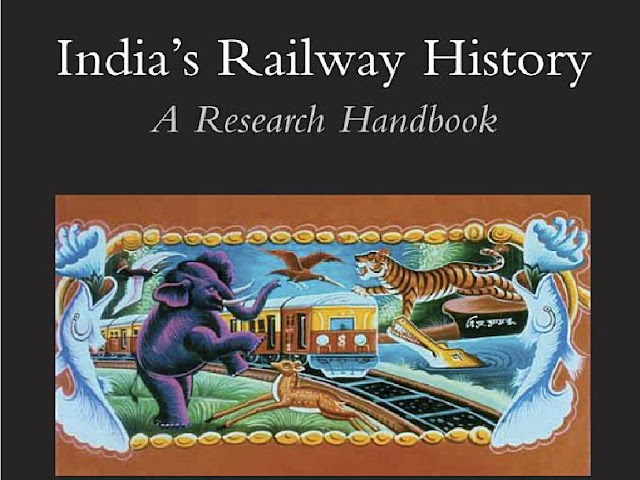 Railways and Elephant deaths in railway tracks is a long history. I was reading a very interesting article in the link related to IPS (Inter Press Service) on Tribal Rights (dated 22.02.2013), where I came across an interesting comment:
hogy • 8 days ago
My attention was piqued when I saw this in the sidebar. Ashish Kothari quoted: “Roads, railway lines and transmission lines through forests cause fragmentation and risk killing animals (dozens of elephants have been killed attempting to cross railways),” he told IPS.
My work on ricksha arts in Bangladesh turned up a wonderful handpainted backboard panel of an elephant attacking a RR train. I thought of it as emblematic, but heard from one of the authors of *India's Railway History : A Research Handbook*, that when trains got going in India early 19th c., "Almost immediately environmental costs of railway development were noted from deforestation to increasing malaria (blocking of waterways created breeding areas)--and yes, confrontations between elephants and trains." This colorful panel attained the cover of that book.
So sad for the animals and the forests. 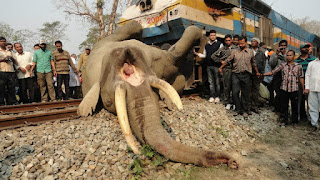 Many of us saw the news footage on television yesterday and in the newspapers today about an adult tusker being dragged to death by a train at Buxa Tiger Reserve. The Field Director posted some photos on social network. It is not a pleasant to see such photos, but I am adding one to help to understand the impact. Some news claimed that the train driver said that the elephant came charging to the engine and hence died. Most of the time we have observed that the elephants like humans usually do not cross the railway track straight but often walk on the track for time till a better place to get to the other side is found. Also with some experiences on road I have seen that if a car or truck honks at a crossing elephant, specially loner, the elephant chases the honking vehicle. 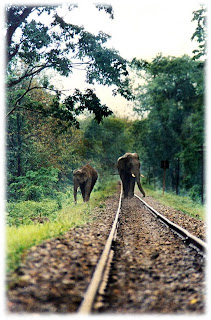 This particular tusker was seen by us quite many times during travelling by the intercity express towards Alipurduar. Also locally, the tusker was always seen in this area, and has never been heard to cause any damage to people or property. The place where the accident took place, to my knowledge is about a kilometre from the Damanpur Range office. Are we missing the basic duties as Forest Department, protection and monitoring of wildlife? This is the basic question from well meaning, responsible and conscious tax payers, whose hard earned returns support this department, especially when logging has been banned in India. It is the questions from the well meaning villagers living around the protected areas, who through generations have protected this open treasury called forests and wildlife. Other than the elephant deaths by train, recently there had been a few elephant deaths in the forests, which were detected only when they smelt rotten. 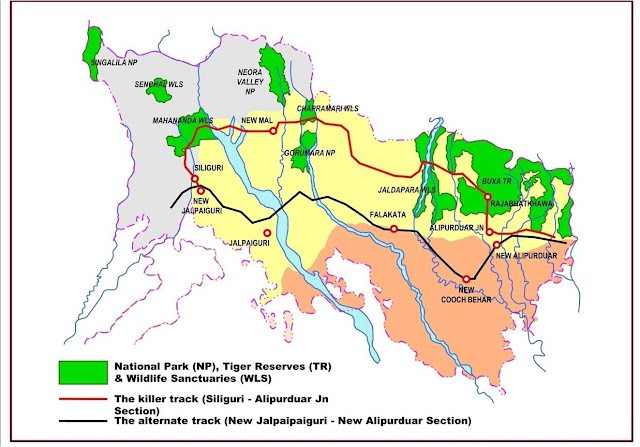 In North Bengal, where elephants are International and covers a landscape which includes Nepal, Bhutan and India, and has also been reported to visit the Bangladesh border, the problems in conservation is multi-dimensional. The human-elephant conflict is in its extreme level, with elephant habitats fast converting into human needs, which includes villages, increasing urbanization, increasing tea gardens, increasing land demand by the defence forces and increase in unplanned developments. Under such circumstance, it has never been planned to provide local people with a livelihood of protection and monitoring of the elephants in the wild. Other than affinity through religion, that has till date helped to keep the local elephant population steady, livelihood can play a major role in creating a sense of ownership in conservation of elephants and their habitat. 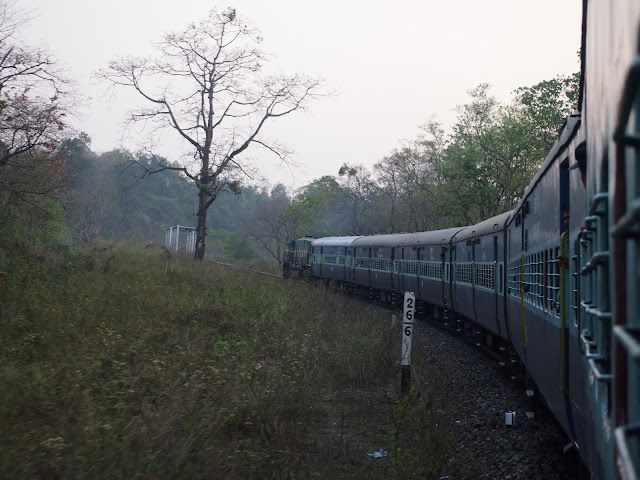 There has been 02 PILs (Public Interest Litigation) at the Calcutta High Court:
In 2000, a PIL was filed in Kolkata High Court
W.P. No. 13220(w) of 2000   in the matter of laying a broad gauge railway track from Siliguri to Guwahati passing through certain Wildlife Sanctuaries and Reserved Forests in North Bengal.


This matter came up time and again before the court. Finally on 10.5.2002 the Court received a joint inspection report (prepared by some high officials who were supposedly well conversant with the subject) filed on behalf of the Union of India.  They detailed in the report the manner as to how best the animal sanctuaries can be saved from the alleged threat likely to be caused from the conversion of gauge.
The committee, that was formed with three persons taken from the Wildlife Institute of India, Forest Dept. under the Ministry of Forest & Environment and the Ministry of Railways, made some recommendations. According to the committee, those recommendations, if implemented and followed, would protect the wildlife of the area to a great extent, even after the proposed conversion.
On August 20, 2002, in view of those recommendations, Kolkata HC directed the railway authorities to see that those recommendations are  adhered to and implemented. Then with hope and trust that railway administration will implement the recommendations in real spirit and see that the peace of the wildlife is least disturbed, HC disposed of the PIL. 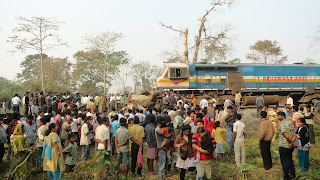 Now there is a second PIL with the Hon’ble Calcutta High Court, which has been done only because of the fact that neither the Railways, nor the Forest Department or the Experts or anyone else are ready to take responsibility of the elephant deaths, and the entire pro-elephant conservation fraternity, both local and global has to watch this Jumbo death circus.