Chilapata, one year of Shibjee 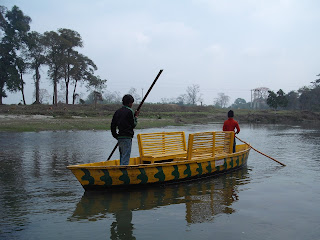 It has been one year that Buada's father, Shibjee has left us.In the mean while the construction for a livelihood centre has been planned to be dedicated to him. The centre would be the hub for Central Dooars for capacity building of Tribal Women and children living in and around the forest areas. A small weaving centre has already been started below a elephant cottage, but it will need funds to built a long house for the purpose. This would also act as a 'rural museum' of forest dwellers. I thought it would be worth to post my old article on Shibjee, which tells the tale of a trail of human migration, which has always been a part of Northeast. 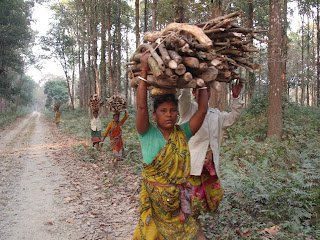 Chilapata Sanctuary, 08th April 2010: Last night when Buada rang me up from Chilapata sometimes past 10 at night, I had just returned from the Northeast Council Tourism Meet at Gangtok where one of the major points of discussion was ‘how can tourism stop climate change’. This was the second discussion this week, as on Sunday at a meeting of the Environment and Forest Ministers of the two nations, Bangladesh & India, I was asked to speak on ‘Sunderbans, tourism and climate change’.
Buada told me that his father Shibjee had passed away. I rushed to Chilapata today morning and found several people from different communities (Oraon, Munda, Kora, Karjee, Rabha, Mech, Bihari, Nepali, Bengali and Rajbongshi) were present at the funeral. A old man was sitting in front of Buada’s house and was continuously crying and saying, Shibjee first came to our house more than 50 years back and my father looked after both of us as brothers.
In a small village near Samastipur in Bihar, Shibjee was born. His father passed away in his young age, and his uncles claimed his mother of having mental problems and chased her away with her two sons, other elder to Shibjee. The uncles took away the land and the mother with two sons took shelter at a Brahmin’s house at Samastipur. The elder brother went as a child labour to Samastipur Jute Mill and the mother with younger son worked for the Brahmin at his house.
Not long when Shibjee went to work at Ranchi, from where he managed to go to Calcutta. A long part of his life as he told his son Bua (Ganesh Sah) that he served a doctor at his house in Chittagong. In the year 1949 and the early 1950s, East Bengal was undergoing the process of becoming East Pakistan, and the Pakistan constitution was being formed on the basis of Islam. This created riots in East Bengal, West Bengal, Assam, Bihar and several parts of the subcontinent. 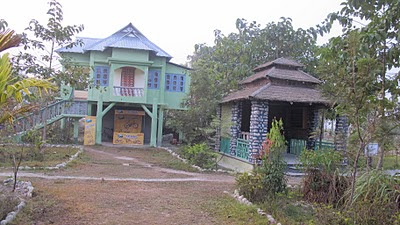 This made Shibjee flee Chittagong in 1954 and come and take shelter in Mathura Tea Estate, one of the first established tea estates of Dooars. The rise of the industrial revolution in United kingdom in the 18th & 19th centuries, that was the time when the English sailed continents in search of new grounds for entrepreneurship, and started to create tea estates in India, mainly East. As a result, large forested landscapes had to be alternated with tea plantations. This is when they needed labours. The Barraiks were instrumental in bringing thousands of labourers from their state of Bihar and adjoining areas, who were made to work hard in these plantations at the present area Mathura next to Chilapata Sanctuary. In the process, the Barraiks became Rajas or Landlords of the area and owned large land areas, elephants, arms and people.
Chilapata had seen kings in the past and the fort ruins next to Bania River remain silent witness to the glorious past. As per historians, the ruins belong to the Gupta age and are often referred to the mythology of Nal Raja of Nal-Damiyanti. Several others believe that this fort belonged to Naranarayan, the King of Coochbehar and some argue that the area belonged to his General Chilla Rai, who was a great warrior and administrator. Today, the ruins are almost hidden in the forests of Chilapata Sanctuary, where the fort is inhabited by our wilder part of the ecology which includes everything from elephants to pythons, both very commonly sited.
Shibjee started his livelihood by selling chana masala in and around Mathura. He gradually started venturing in the forests carrying snack food to sold to the mahalders and their party, who were engaged in timber extraction. This was a continuation of the imperialistic British policy of earning revenue from their empire areas rich in natural resources. Timber and Tea industries were then at its best in the Bengal Dooars areas and brought generous returns for hardworking Shibjee. The turning point came in when he and his Nepali friend were trampled by a wild elephant in the forest. His Nepali friend died, but he survived with severe injuries. The timber merchants and their people rushed him to the Alipurdual hospital and after weeks of struggle survived. He was no more capable of walking around to sell his snacks. The Timber Merchants then built him a small shed at present Chilapata More, where his son Bua (Ganesh Sah) still lives with his family, from where Shibjee sold food and sweets often patronized by Timber Merchants and Forest officials coming for short stay at the Chilapata Forest Bungalow.
The Chilapata Forest Bungalow, which was a major transit Bungalow for government officers in the past, a must stopover from Coochbehar through the Dooars in those good old days when the unbroken forests along the Bhutan foothills were abundant with wildlife. The old log book describes the presence of Tigers, Panthers and several other celebrity wildlife which were easily sighted. The other day Chilapata Jungle Camp had some guests, one of the elderly ladies was the wife of a retired Conservator Forests, who had stayed here more than thirty years back. She described that the bungalow was surrounded by forests and had a water body in front, which attracted wild animals throughout the day. Several retired and present forest officials called Buada on his mobile and conveyed their message on the demise of his father Shibjee.
Ganesh Sah, Buada as he is popularly called in the area was brought up in the forest among the timber extraction business. His skills, intelligence and upbringing soon made him a Man Friday to the illegal timber trade lobby. He gradually became a threat to the local Forest Department. In the mid and late 1990s, a community based tourism movement was started by Help Tourism with the West Bengal Forest Department in North Bengal, both Hills & Dooars, a process to achieve protection of forest resources through tourism. The then Minister for Forests, Mr.Jogesh Burman himself, a strong believer of this movement aggressively used the tool for the forest fringe villagers. Buada, became a part of this movement with enthusiasm from the Minister and DFO.
He took a loan from the local bank and started with a tourism infrastructure in the fringe of the forests, behind the Chilapata Forest Bungalow in the name of Shibjee Green India Tourist Cottage. This became a project in isolation and there was hardly any market linkage. Buada was disturbed with the increasing bank interest and approached the Minister again, who suggested him to contact Help Tourism. In the meanwhile Help Tourism was already supporting a wildlife researcher, Subhodeep from Alipurduar on forgs & toads. He along with guidance and support of Zoological Survey of India scientist, Kaushik Deuti encountered upon a new species of frog at Chilapata.
Hence, Help Tourism took up the responsibility to be involved with Chilapata Sanctuary, the green corridor between Jaldapara Wildlife Sanctuary and Buxa Tiger Reserve. With the help of Wildlife III of West Bengal Forest Department, 29 local youths from different communities were trained as ‘ecoguides’. An yearly ecotourism festival was started with fixed date celebration from 15th to 17th September. Buada was given the support to complete the infrastructure, local people were trained to provide services and bank debts were cleared through a partnership, keeping the ownership of Buada intact. Branding of the infrastructure was brought intune as ‘Chilapata Jungle Camp’. Conservation networking with adjoining Bhutan and Manas Biosphere Reserve has been started.
The Chilapata Initiative is being taken forward to be the core between Assam-Bengal and Bhutan-Bengal Conservation Tourism relations. The rewind of the imperialistic deeds are not possible, but to bring back community ownership and responsibility for their natural resources is ofcourse the goal, which in turn will help to slow the ‘Climate Change phenomenon’.
- Pix: Jayanta Roy, e.mail: info@helptourism.com
Posted by Unknown at 2:24 AM