Of Monsoons and Floods 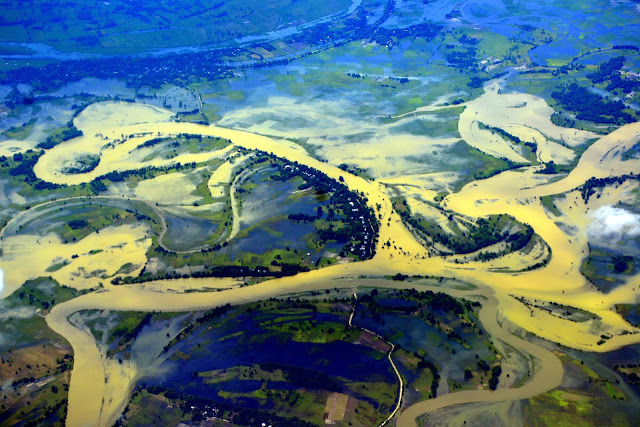 Thursday, July 19th, 2012. Siliguri. Many of you who read this blog may not have access to some of the news from this part of the world, the Northeast India with North of West Bengal, a region with 98% international borders and 2% with the own country, India. As soon I was reaching Siliguri by train today morning, I caught hold of some of the local dailies. The news about the devastating rains dominated the newspapers like every monsoon season, this year specially could have been one of those heavy ones, but I also read very interesting news, which I would like to share with all of you. 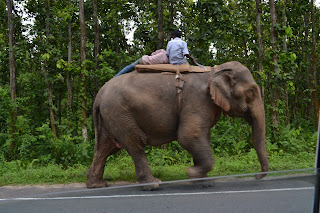 There is a small locality market or small town surrounded by tea estates in the foothills of Bhutan Himalaya called Nagrakata in western Dooars. Closeby, is the almost unknown village of Khayerkata on the banks of Kuchi Diana River. This river is easily crossed on foot, cycle or car in any season except monsoon. The recent rains have also broken the only culvert on this tiny river. A local village lady, who was pregnant had labour pain, and inspite of the ambulance reporting from the nearby health centre, it could not cross the river to bring the lady. The local villagers tried their best but could not cross the river. Finally, she was taken back to her house, where with the help of the village ladies she gave birth to a baby girl. The condition of the mother was serious, and she with her baby were finally carried across the Kuchi Diana River by 02 Kunki Elephants, Surya and Fulmoti to the ambulance and then to the Sulkapara primary health centre, where they have been reported to be safe. The 02 trained elephants from Garumara National Park are the only hope now for that area to carry relief, cross school children across the Kuchi Diana, who would have otherwise missed their school this whole monsoon.
We are still happy with the rains, if we do not have the magic monsoons in the Indian subcontinent, life and food in most parts of the world would be lost. Most scientists refer to the reducing monsoons to be responsible for the end of the great Indus Valley Civilization. The drying of rivers, which are mostly rain fed and partly glacier fed, live with the monsoons. These rivers create the habitat to sustain life and finally civilizations. 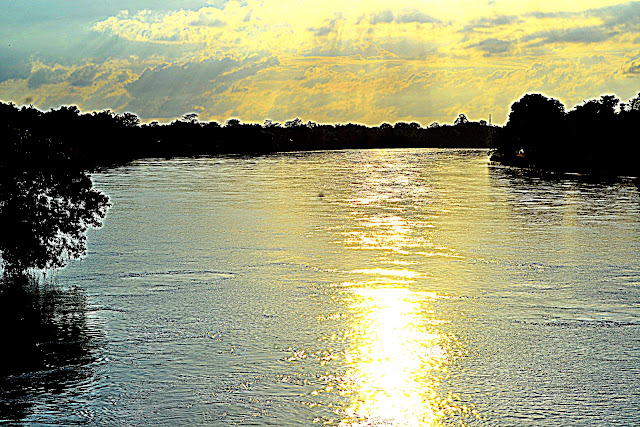 Our rivers in the foothills of the Himalaya in Northeast and North Bengal are often flooded every monsoon season. At certain intervals of a few years, the Indian Summer Monsoon Rainfall (ISMR), as it is technically called is more than the others inbetween. This year the end part of June was furious, the last it can be compared with 1998 monsoons. All small rivers and rivulets meeting each other and flowing into each other, creating a mega flood condition in the Brahmaputra valley. For people who live in urban areas are frustrated with the rains, making their lives difficult. There is hardly any connectivity of their lives with the rains directly. For the inhabitants of the villages and the forests, the rains are the other names for life. The biodiversity and agriculture of this region is dependent on the rains.


Asit and I made it a point to cover the Mighty River Brahmaputra for the last 10 days, mainly the protected Areas connected to the Brahmaputra valley. Help Tourism and friends have built a school for children at 8th mile near M’pen at Namdapha Tiger Reserve, mainly because the temporary school beside Noa Dihing river was taken into the river every monsoon, hence a concrete base building on stilts was needed (please see http://www.helptourism.com/blog/namdapha-nalanda-nature-school-an-act-initiative/). 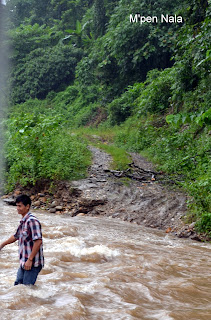 We had bought a few mangoes for the 120+ school children; they would hardly get any in this remote area. As all of them are Buddhists by belief, the local legend that they believe in the community, that when you go to heaven after all your good deeds, you will be received with a mango, and also that the favourite fruit of Lord Buddha was the mango. It was raining like mirror that day and inspite of having a 4 wheel drive Sumo from Miao, we could not cross the M’pen nala. There was no way, we could walk across as the local people feared that the flash flood would take us away. There was not enough time to contact the forest Department elephants. We waited the whole day, knowing that the children will be waiting for us at the school, neither could the teachers reach us, nor we could reach the school. It was only 02 days later that the young teacher Sanjay managed to contact us and we told him that we had left the mangoes with Phupla at Miao. Another senior teacher, Suryamoni had picked it up. 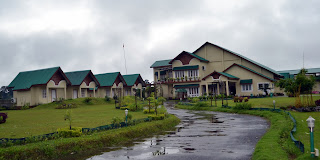 The next continuity was to Dibru-Soikhowa National Park and adjoining areas, including Padumoni Sanctuary. We were sad to hear the news that only a few days before some youths ventured into the DSNP and brought out some dead deer and the same was not reported to the Forest Department. It is every monsoon, when the rains are extremely heavy, the animals assemble at the high areas of the National Park (which is common to a few Pas in Assam) and this is a good opportunity for the poachers, who wait for this time of the year to take on them. The cattle from the islands are shifted to the mainland before every monsoon, but their wild counterparts have their own surviving spirits. Because of the heavy rains we stayed at a very interesting place known as Padmini Resorts, which has easy access to the Protected Areas and also Tea Garden based activities. It is from Vicky, the local tea garden owner, we learnt that the low monsoons in early June has given low crop, but the heavy monsoons now will give good quality tea this year. 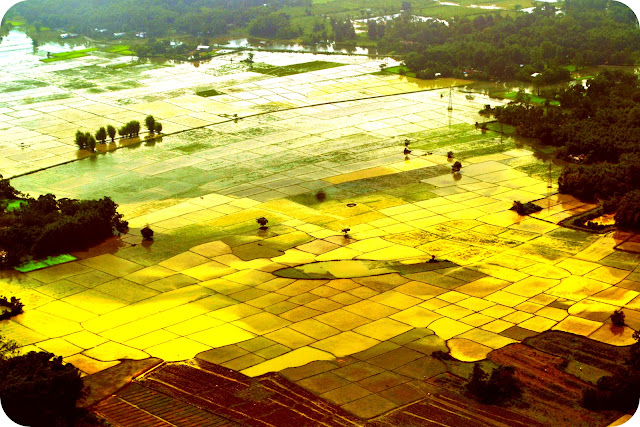 We went on further downstream and tried to reach the Dihing River Camp, but for the Dihing River floods, we could not reach the camp. The men of the camp came to see us at the Ranga-lau Bazaar near the Gammon Bridge on the National Highway, all of them, Prashanta, Dulal, Bittu and others who were happy because they felt that this flood will give them better crop as this will leave their lands more fertile. The Dihing river here falls in the Brahmaputra not far away from the camp and a new bridge, Bogibill which is being built here on Brahmaputra, only the tips of the pillars are visible. As we talk to the elders at Sepiakhati village, they tell us how they took their vegetables and paddy up the Dihing River to the Buddhist villages upstream. They also often heard from their grandparents about the tantric monks with magical powers, who came from the Brahmaputra in boats and traveled upstream on the Dihing River. 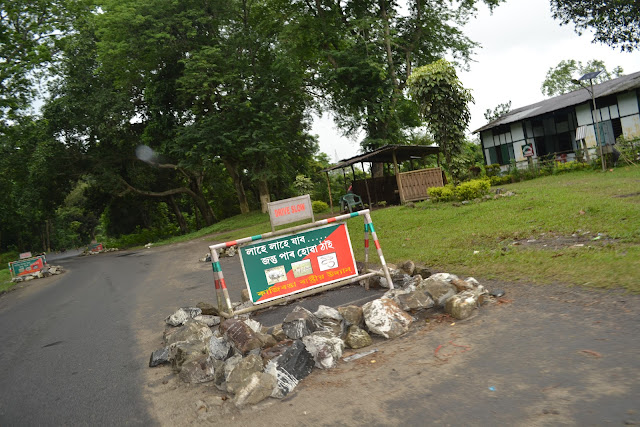 We then advanced toward Majuli through Nimatighat to find out about the situation of our friends at Majuli Island, the administration had ordered only 02 to 03 ferries a day and we did not want to take up the space, which were local rations and relief, and hence we moved on to Kaziranga National Park. We went on the roads which were flooded, mainly on dates between 26th to 29th of June, we found a young Rhino foraging close to the road. We have to understand the fact that if the Kaziranga does not flood periodically, the wetlands, which dominates the landscape of Kaziranga will not be replenished, and the habitat will no more be suitable for life. The nature had accordingly provided with highlands which continued to the Karbi Hills, and we as humans have closed all passages with Tea Gardens, villages, oil and electricity establishments, security camps and ofcourse the numerous hotels and lodges. It is mainly the road, the National Highway which has become a barrier for the animals to move to the highlands during floods. Still things carry on; the villagers along with the forest Department make every effort for safe retreat of the animals in danger. The lodge manager was describing that during his return from Guwahati during the high floods, a row of cars and vehicles were stuck up after the Shiva Mandir. He got down from his car and walked ahead and to his wonder found a middle aged village couple rescuing a drowning deer from their fishing boat. All the car passengers who witnessed this act were so moved that the couple was rewarded with a few thousand rupees instantly. 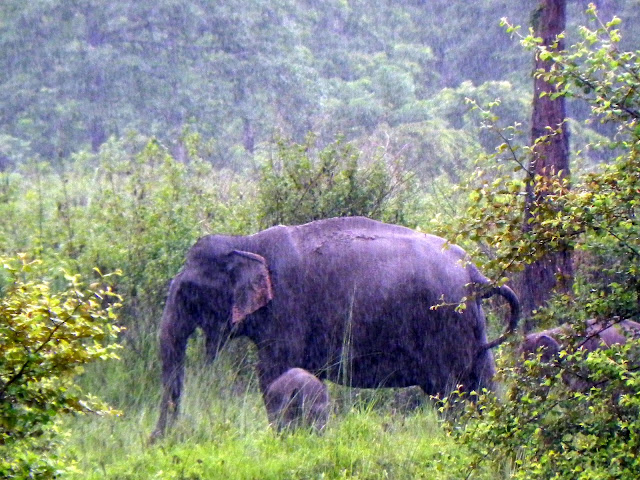 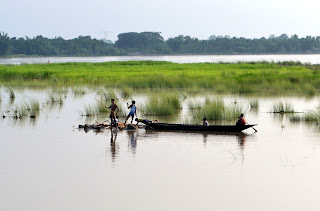 We drove a long distance along the North Bank to Manas Biosphere Reserve, where we have been long involved in channelizing the post political insurgency youths to local conservation and tourism, a process to establishment of peace and bringing the World Heritage Site out of the danger tag. We were worried because the animal sighting in the past 02 have increased, including that of Bengal Tigers, Black Panthers, the reintroduced Rhinos and more. Our members of MEWS were doing good work, the tourism initiative there has enhanced the conservation process. Though it was heavily raining, Manas seemed to be under control and animals moved around quite safely. Manas is a part of Eastern Dooars or Assam Dooars. There are several PAs all along Western, Central and Eastern Dooars in continuation with Bhutan, all formed mostly on the flood plains of the Himalayan riverine system. The unique diversity of habitat from grasslands to high forests has become the home for many endangered and important animal species. These areas become susceptible to massive felling during the monsoons. The monsoon method of ferrying the illegal timber is through the flooded rivers, locally a practice called ‘chali’. Along with several volumes of drift wood, illegally felled trees are also collected at villages where roads and rivers meet and finally sawed illegally in mills or temporary set up manual sawing systems. 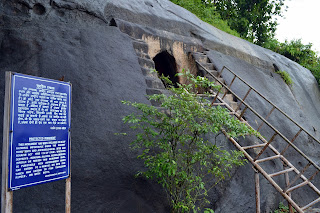 Forests or wildlife have always been the sacred resources for the communities of the present Indian subcontinent before the influence of the industrial revolution. The commercialization of the natural resources is hardly a 200 years history which has marginalized the great culture of ‘Biodivinity’ in this subcontinent. This region of Dooars was so rich in timber resource that the British Government in India established railway lines to bring out the timber. We decided to visit Jogikhopa, once a forest area with caves which were the practicing homes for the Tantric Yogis on the Brahmaputra. Often when traders passed on these routes saw the Yogis crossing the Brahmaputra on foot with a tiger or elephant following them. All these places have been touched with so called modern development, centres for transhipment of natural resources, but still carry the memories of our eternally developed past. 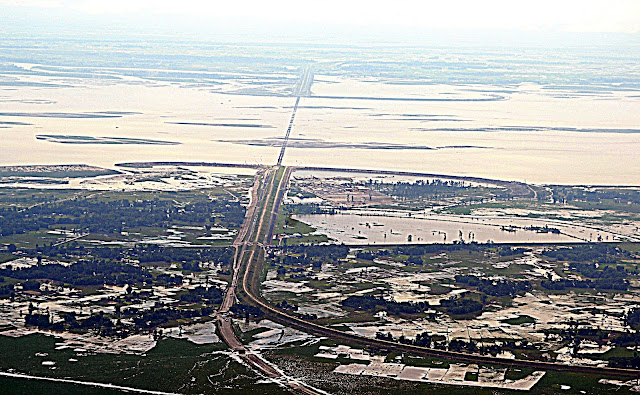