Jashoda Chettri from Sikkim is continuing a training with NDTV Broadcast Training Programme, New Delhi. She made it a point to attend the Northeast Festival at IGNCA, reports 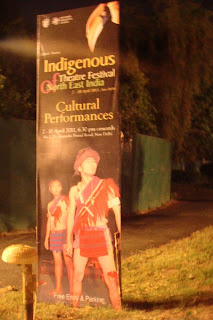 Newspapers in Delhi were splashed with advertisements of the weeklong indigenous Theatre festival of the North East at Indira Gandhi Centre for Culture & Art (IGNCA), New Delhi from April 1st-April 30th, 2011. The advertisement mentioned that entry and car parking were free (as if to imply this will ensure good crowd). A website says ‘ Take a look at the textile exhibition with dresses and apparels from different regions of the northeast. From apparels and costumes of Ras Lila in Manipur to Assamese Bihu dance costume, the show displays an interesting mix of lifestyle of the people and their lives.’ 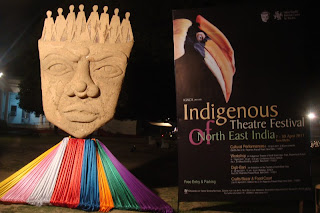 But most of the days’ visitors were greeted with empty parking lots and only participants roaming around the premises aimlessly. A food festival has also been organised which where bhel puris and paani puris seem to be doing brisk business with the North East food stalls closed owing to a fire which apparently gutted the food stalls. A handloom and handicraft exhibition is also a part of the festival but there are hardly any buyers. A Naga stall owner admitted that “sale bahut kam hai” The plays were the saving grace but even they could not salvage the festival as it was a classic case of noble intentions gone horribly wrong. Hope the seminar lived up to expectations. 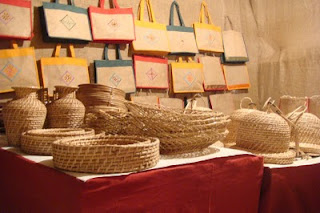 IGNCA the organising body of in its hand out mentioned that the festival has been organised with the objective to promote the rich cultural and traditional heritage of the North East. The website has gives detailed information about the festival. But I wonder if that helped. Delhihites hardly seem to be aware of the festival. I took some visitors for a play from Arunachal Pradesh but we had to come back disappointed as the play was delayed by more than an hour because the organisers had to cramp the events of the previous day as well as a fire disrupted the schedule of the previous day. 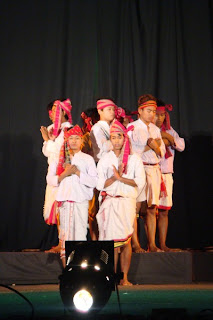 A bunch of French tourists were walking past the stalls. One lady went to a Nagaland stall not to buy anything but to enquire about places of interest in Nagaland. She was in a dilemma as somebody told her she will need an Inner Line Permit to visit Nagaland while somebody else told her that her Passport would suffice. I am wondering if my vote should go for entertainment (the festival) or information (to travellers).
Text & Pix: Jashoda Chettri
e.mail: jashodachettri@hotmail.com