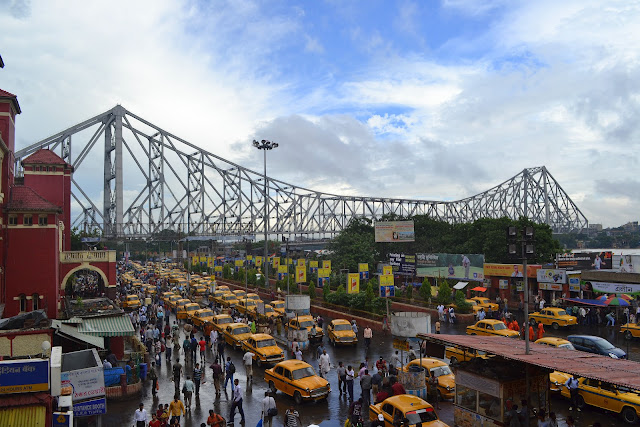 Kolkata, 04th August, 2012. Santosh Paul was devastated by the Teesta floods of 1968, his ware houses were all gone, so were his trucks and the wooden house 1st floor was miraculously floating, but the ground floor with all valuable storage was fully underwater. All he could manage is to shift to Calcutta with his wife, 03 sons and an unmarried daughter, find out a rented house and start everything afresh. It was not easy, from a roaring 03 generations business at Jalpaiguri, shifting to Calcutta with almost nothing but some values. As he was always with business, he wanted to start as an entrepreneur. He tried his hands-on on everything which was honest and respectable, but in vain. With 03 sons and a daughter still studying he and his wife smilingly faced the crisis with full surrender to Mother Goddess Kali at Kalighat temple. 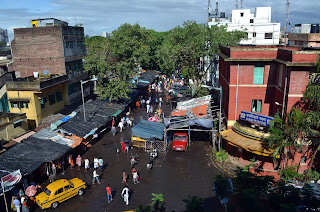 The day came when there was a good person who wanted to marry their daughter, but then he wanted that Santosh should speak to his relatives. Happy Santosh and one of his neighbours in confidence went for finally fixing the dated with the ‘to be grooms’ relations and they hired a taxi as they had to buy sweets and carry them all the way from the south to the north of Calcutta. After reaching the relations, there were some hot talks as there was economic difference between the families and the relatives wanted the marriage should be in the traditional way with all celebrations and formalities. The taxi had already waited long and the Punjabi (Sardarji) driver was not very happy. On their way back, when the neighbour and Santosh was discussing the issue in details, the driver overheard. After they reached home, the Sardarji driver refused to take the rent and offered to give Santosh a few thousand Rupees for his daughter’s marriage. He also came for the marriage. 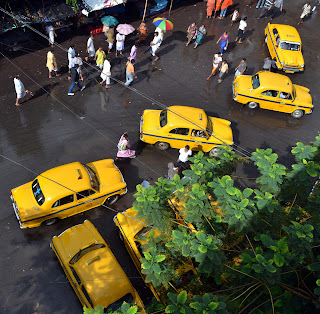 Like the London cabs, the yellow cabs of Calcutta (now Kolkata) also are a legend to the great city. Every cab and the driver have a story. Day before yesterday, I had to travel from North to South at Calcutta and I was talking to the elderly driver of the taxi, Bhupen Singh. For more than 20 years, he had driven a private car of a corporate head, who after his retirement went back to Bombay (now Mumbai) and offered Bhupen to go with him. Bhupen was attached with this city and wanted to stay back. The retired corporate man gave him some money and organized a bank loan for Bhupen to buy a taxi. Now, Bhupen is a proud owner cum driver of his taxi and is probably one of the most reliable and decent persons I have met. He along with three of his friends after months at Hazaribagh jail (for being a part of Jayaprakash Narayan’s movement in Bihar), were released with a payment of Rs.60/- each for the labour which they had given during their time in captivity. This was the month of September or October, but time for Durga Puja. The 04 young men sometimes in 1972, decided to go to Calcutta with the Rs.60/- and see the Durga Puja celebrations. The 03 friends returned to their village in Bihar, but Bhupen had already fallen in love with Kolkata and decided to stay back. Today, he has bought an apartment for near South City Mall for his family and his 26 years old son works for an IT company. Bhupen is proud that his children are more fluent in Bengali language than Hindi. Bhupen can be contacted at 9331374031. 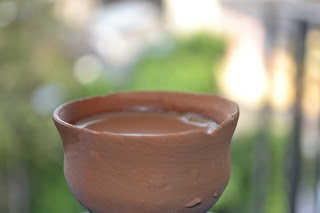 Calcutta, like many of the cities of the world is a destination of opportunities and many youths come here to live their dreams. Till the time they do it sincerely and honestly, the city will remain a better place to live in and visit. Unfortunately, the picture is not as rosy; there are people who want to be rich overnight by cheating others or by irresponsible actions. Recently, as I had reached the Sealdah station early around 6am by Darjeeling Mail, there were several yellow taxis, but hardly any to serve the passengers in the queue. A policeman was running around the place to force the taxis to serve the passenger queue, the taxi union members were sitting idle at the pre-paid taxi booth and a bunch of drivers were trying to woo the passengers in the queue asking for double fares. The issue did not end here. 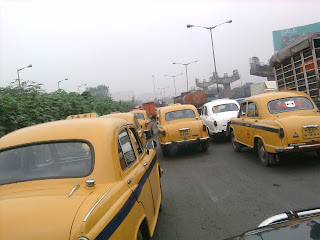 I am not always comfortable in big city ambiances and I had to deliver a ‘Rakhi’ at a place, of which I had a written address, before I could reach my place of stay. The yellow taxi driver seemed to be a sober and friendly man and when I requested him to take me to the said address as I was not well acquainted with that particular part of the city. Immediately, he did something with his meter which jumped units. After I reached the said place and asked for the printed receipt, he said that his paper was finished. I asked for the rate card, he said as the rates have changed, I have to pay him 50% extra after doubling the Rupee numbers shown in the metre. As this was a remote area, there was hardly anyone in this morning hours to enquire. I paid him. As I reached the contact person, who lived a little inside from the motorable road, I understood I was wickedly cheated. I remember a part of the taxi number WB ? E 7379. I was not unhappy being cheated, but I was worried to where this great ‘city of joy’ was leading to, a city which boasts of being one of the most friendly cities in the world today.